My main four books have each been published by LSU Press. This relationship started because my first topic was the work of native Virginian William Styron so involved discussion of Southern writing. I have rarely separated subject matter from actual life. Befriending Styron as a young PhD student was a part of my intellectual and emotional journey. In preparation for my visit to his Connecticut home in 1988 I read Philip Roth’s The Ghost Writer, a novella about a young writer visiting an older, famous one. In the later book on Styron I describe my own version of such an encounter and the friendship that developed. I also write about visits to his American and European settings.

In between the works on Styron I wrote about Joyce Carol Oates and then edited a collection of essays about her. My interest in Oates’s writing began during my time as an MA student between 1984 and 1985 at SUNY Brockport in upstate New York, close to where she grew up. The Bruce Springsteen book originated from an earlier time still, the late 1970s and dawn of the 1980s, when, fanned by his music, my youthful ambition caught fire. A sentence can change a life and that sentence, for me, was “Talk about a dream / Try to make it real.” That’s what we do when we create, and creativity takes many forms. 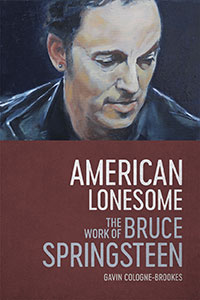 American Lonesome begins with a visit to the Jersey Shore and ends with a meditation on the international legacy of Springsteen’s writing, music, and performances. Blending research, cultural knowledge, and creative thinking, it dissolves any imagined barriers between the study of a songwriter, literary criticism, and personal testimony.
Appraisals 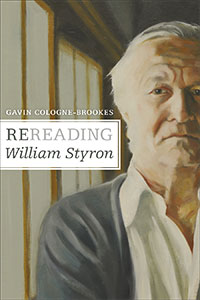 The first critical study of William Styron since his death in 2006, Rereading William Styron offers a reflection on the writer’s works, world, and character. It combines personal anecdote, scholarly research, travel writing and primary material to provide fresh perspectives on Styron’s achievements.
Appraisals

This self-published volume is a fictionalized memoir based on a quarter of a century of road trips around the United States. A work of emotional rather than actual truth, material in it became the basis for aspects of American Lonesome and Rereading William Styron, but its blend of fact, fiction and fantasy amounts to an approach wholly foreign to those two LSU Press books.
Appraisals

This volume is a guest-edited special number of the journal, Studies in the Novel. The contributions come from across the United States as well as Britain, Ireland and Portugal. Among the contributors are novelists Sharon Oard Warner and Edmund White, historian Henry Louis Gates Jr., a range of literary critics, and a college president co-writing an essay with a recent undergraduate. The volume also contains written interviews and a conversation with Oates herself.

Dark Eyes on America: The Novels of Joyce Carol Oates (2005)

This book on America’s most extraordinary woman of letters traces in Oates’s work evidence of an evolving consciousness that eventually foregoes abstract introspection and the philosophical pursuit of certainty. In its place, Oates’s novels, stories, essays and interviews ultimately promote a more practical approach to art as a tool for understanding personal and social problems and possibilities.
Appraisals

Writing and America is a volume of essays, edited with Neil Sammells and David Timms, surveying the writing genres that have contributed to notions of America. It contains contributions from scholars on both side of the Atlantic that together chart the range of responses to American nationhood from colonial times to the present.

The Novels of William Styron : From Harmony to History (1995)

This is the first comprehensive study of William Styron’s work and contains extensive conversations with Styron, included as an appendix. The book follows Styron’s shift away from modernist forms of aesthetic experimentation and personal isolation toward an engagement with society and history. Influenced by writers such as Albert Camus and George Orwell, Styron comes to confront political issues such as slavery and the Holocaust.
Appraisals

Cologne-Brookes traverses Springsteen’s America, weaving personal insights and memories with those of classic artists, writers and thinkers, from James to Oates, Stendhal to Hopper. Together, the voices form a textual chorus that reflects on Springsteen’s music and reveals the meanings of a ‘hungry heart’ in American art, culture, and philosophy.
Daniel Cavicchi, author of Tramps Like Us: Music and Meaning among Springsteen Fans

With isolation as its jumping-off point, American Lonesome contains multitudes. Beyond Walt Whitman, Bob Dylan, and Flannery O’Connor, Cologne-Brookes connects dots from Springsteen to an expansive gang of writers, thinkers, and artists such as Stendhal, Styron, Dostoevsky, Dickinson, and William James. It’s a rich read for any serious Springsteen fan. Both personal and philosophical, a kaleidoscope of a book.
Christopher Phillips, coeditor of Talk About a Dream: The Essential Interviews of Bruce Springsteen

A powerful in-depth study that acknowledges what has been written and said before about this writer and musician, adding the author’s own perception, experience and memories of Bruce Springsteen’s life and work. Cologne-Brookes has wonderfully woven philosophy, literature and music, by connecting Springsteen to some of the most interesting of his contemporaries and classics in a concise, poetic and distinguished prose. As with Dark Eyes in America, American Lonesome interprets the character of a nation, no small feat.
Alina Tortosa, author of Born and Bred in Buenos Aires

As a memoir, travelogue and meditation on creative and critical processes, it is full of insight . . . a fascinating exploration of the bond between the writer and the critic, and the difficulties and delights of getting ‘caught up in the tangle of reality and fiction.
Rona Cran, University of Birmingham, Times Literary Supplement

Cologne-Brookes has achieved what would seem almost impossible. He couples solid and incisive literary criticism with insightful personal recollections of his encounters with the author. A must-read for fans and scholars of William Styron.
Michael Mewshaw, novelist

Cologne-Brookes’s beautifully written, perceptive, and compassionate rereading of Styron’s work rests upon his penetrating analyses of the novels and essays, their interconnections, and his own conversations with Styron. . . . This is essential reading for all Styron’s admirers and critics, culminating in Cologne-Brookes’s own journey back in time to Auschwitz and Tidewater Virginia.
Samuel Coale, Wheaton College, Massachusetts

Rereading William Styron is both a personal memoir and an astute re-evaluation of Styron—the man and artist—offering a fresh perspective on Styron’s fiction and nonfiction, informed by Cologne-Brookes’s friendship with Styron and his own journeys to places that dominate Styron’s work: Auschwitz, Tidewater Virginia, Martha’s Vineyard, and Brooklyn. Cologne-Brookes argues persuasively for Styron’s unique position as an American man of letters, influenced by European writers like Flaubert, Dostoevsky, Orwell, and Camus, as much as by fellow southerner—William Faulkner.
Rhoda Sirlin, City University of New York

If I’m Ever Back This Way

Lively and fun and full of insights about the U. S. and I can attest from personal experience that the accounts about yours truly and Arthur Miller are accurate. I was quite taken with how If I’m Ever Back This Way weaves actual texts (mine and others) into the narrative without strain—it gives a good name to plagiarism à la James Joyce
William Styron

I’ve never read anything quite like it. Sui generis—realist magic, magical realist, bus fumes and ethereal vapors, time and space availing not (sometimes), filled with the gists and piths of America. I was amazed at how much it weaves in, infusing all the writers and places, the allusions (sometimes hidden), the folk and literati and characters. I enjoyed myself all the way, but when Enid Stevick showed up, there seemed to be a real velocity to the saga, the episodic bildungsroman, and I laughed out loud several times. What a strange, good book.
William Heyen, State University of New York College at Brockport

I spent an absolutely delightful couple of afternoons reading about these Greyhound adventures—laughing my head off. I love the combination of popular culture and Greyhound travel and this personal definition of achieving the American Dream. All the ingredients for a wonderful book.
Ladette Randolph, University of Nebraska—Lincoln

A bold, original, and undefinable work, If I’m Ever Back This Way. I read it with much admiration for the inventiveness.
Joyce Carol Oates

Fabulous: packed with tales and characters and free-wheeling conversations as the protagonist careens from place to place soaking up atmosphere and regional revelries: sort of Cologne-Brookes ‘unleashed.’
Samuel Coale, Wheaton College, Massachusetts

Dark Eyes on America: The Novels of Joyce Carol Oates

At once a skilful and passionate discovery of the prodigious Joyce Carol Oates’s evolution, over four decades, into our most important living writer. Within the inevitable proliferation of Oates scholarship, this study will always serve as compass and divining rod.
William Heyen, New York State University College at Brockport

An ambitious, capacious book, arguing for a significant relationship between the themes of Joyce Carol Oates’s oeuvre and the philosophical traditions of pragmatism. What communicates itself strongly, particularly in the detailed discussions of the novels, is Cologne-Brookes’s passionate engagement with Oates’s writing. His accounts of the individual novels are never merely dutiful resumes; he responds in his own lively prose to her experiments with form and language. He makes out convincingly a case for Oates as one of the most important fiction writers of contemporary America, one whose thinking is hugely intelligent and worth exploring with this kind of seriousness.
Tessa Hadley, novelist

Of the criticism of my work I’ve seen, this is very likely the most impressive: intelligently and engagingly written: leaping forward and back in time with dazzling skill, linking themes, recurring images, etc., and drawing upon the work-sheets and notes in the Syracuse collection with the sharp eye of a forensics investigator! I hope this brilliant book is adequately appreciated.
Joyce Carol Oates

This is a sound and engaging book that creates a balanced view of Oates’s career while tackling the question of her role in the wider community.
Susana Inés Araujo, Universidade de Lisboa
Modern Fiction Studies

A major work not only in the scholarship on Oates but also in the application of pragmatist theory to literary analysis. Moreover, its wit and readability make it suitable for students who want to see a model of pragmatist criticism.
Darryl Hattenhauer, Arizona State University,
Tulsa Studies in Women’s Literature

The Novels of William Styron: from Harmony to History

This is quite simply the best sustained treatment of Styron’s fiction I have read. Cologne-Brookes offers persuasive full-scale examinations of each of the novels. His readings take into account virtually every aspect of Styron’s achievement: his polyphonic narrative techniques, his vastly rich poetic prose, the increasing ambition and complexity of his subjects and themes. Cologne-Brookes makes us see his fiction moving from the largely aesthetic concerns of the early work to the broad sociohistorical patterns of The Confessions of Nat Turner and Sophie’s Choice. My feeling is that Styron has finally gotten a critical study worthy of his talents.
Melvin J. Friedman, University of Wisconsin-Milwaukee

Although William Styron is one of this country’s best known novelists, he has never secured thorough, detailed and subtle criticism in book-length form . . . Gavin Cologne-Brookes’s study may be a turning point in Styron criticism. . . . Cologne-Brookes is also a superlative interviewer. . . This book creates a new Styron, a raider on the (in)articulate, a complex ‘double’ of Stevens and James—those American writers who dare to render the failure of language (or the language of failure).
Irving Malin, City College of New York