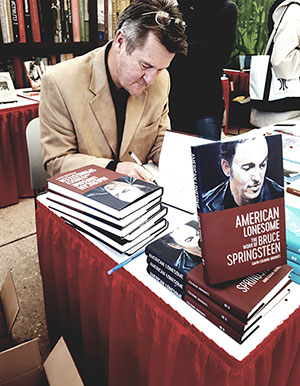 This website showcases my books, oil paintings and side interest in photography.

My books have increasingly combined creative criticism with travel writing and memoir. I learned to paint at school and eventually studied English and History at Loughborough University. After an MA at SUNY Brockport and an American Studies PhD from the University of Nottingham, I worked at Harlaxton College, British Campus of the University of Evansville, Indiana. In 1993 I moved to Bath Spa University, where I was Professor of American Literature 2007-2019 and MA Creative Writing Programme Leader 2016-19. I now divide my time between Wiltshire and Paris. My writing, painting and photography relate to my interest in diverse places, cultures, people and wildlife. Often my subject has to do with a shared phenomenon: our ability to concentrate intently to achieve a specific goal, whether that’s to create, to perform, to observe, or to interact.

Rereading William Styron (2014) and American Lonesome: The Work of Bruce Springsteen (2018) feature portraits of Styron and Springsteen on the respective covers. Both are in part critical memoirs. Styron became a friend while I wrote The Novels of William Styron (1995). On hearing of his final illness, I painted the portrait based on a photograph taken when we first met. Contemplation during the act of painting led to the book. American Lonesome is a reflection on an earlier inspiration. In my years between school and university, Springsteen’s music galvanised me. I painted the cover portrait on submitting the manuscript. Another publication combining writing and painting is Joyce Carol Oates Ou Quelque Chose D’Approchant (2017), a memoir of my encounters with the subject of an earlier book, Dark Eyes on America (2005). Oates wrote of the portrait that she hoped that she was indeed “something like this.”

My verbal and visual expression invariably relates to travel. I’ve spent summers working in Michigan, Pennsylvania and British Columbia; given talks in Luxembourg, Germany, Turkey, Romania, Kenya, Spain, Portugal, Brazil, Uruguay and across the United States; conducted a soutenance (PhD public viva) in France; and travelled in South America and Africa. As with writing and painting, photography is another way of recording people, wildlife and places. There is also a page devoted to photographs of the Crane Academy, a school in Kitale, Kenya. My wife, Nicki, and I took these photographs during our visit in support of the Crane’s link with the Royal High School Bath. I always travel with a camera and, if not with Nicki, where possible with one or other of our daughters. All my work in whatever genre oscillates between subjects either close to or far from home.

Watch
You can watch here a 3-minute clip of me talking about American Lonesome: The Work of Bruce Springsteen at the Louisiana Book Festival, Baton Rouge.

Listen
You can listen here to my BSU Professorial lecture, Mortality and Memoir: Recalling What Matters